Jon Sundell is a master at mixing fun with inspiration. He has always looked on storytelling and folk music as tools with a social purpose: to build compassion, community and mutual understanding, and to foster love and respect for all of God's creation. As a consummate edu-tainer with skills and repertoire developed over 45 years of international experience, he accomplishes this with warmth, gusto and good humor.  All the material, as well as Jon’s manner of presentation, is engaging and dynamic – not didactic.  He underpins the common core of religious faiths in a way that is fresh and alive, while mixing in other material just for plain fun. 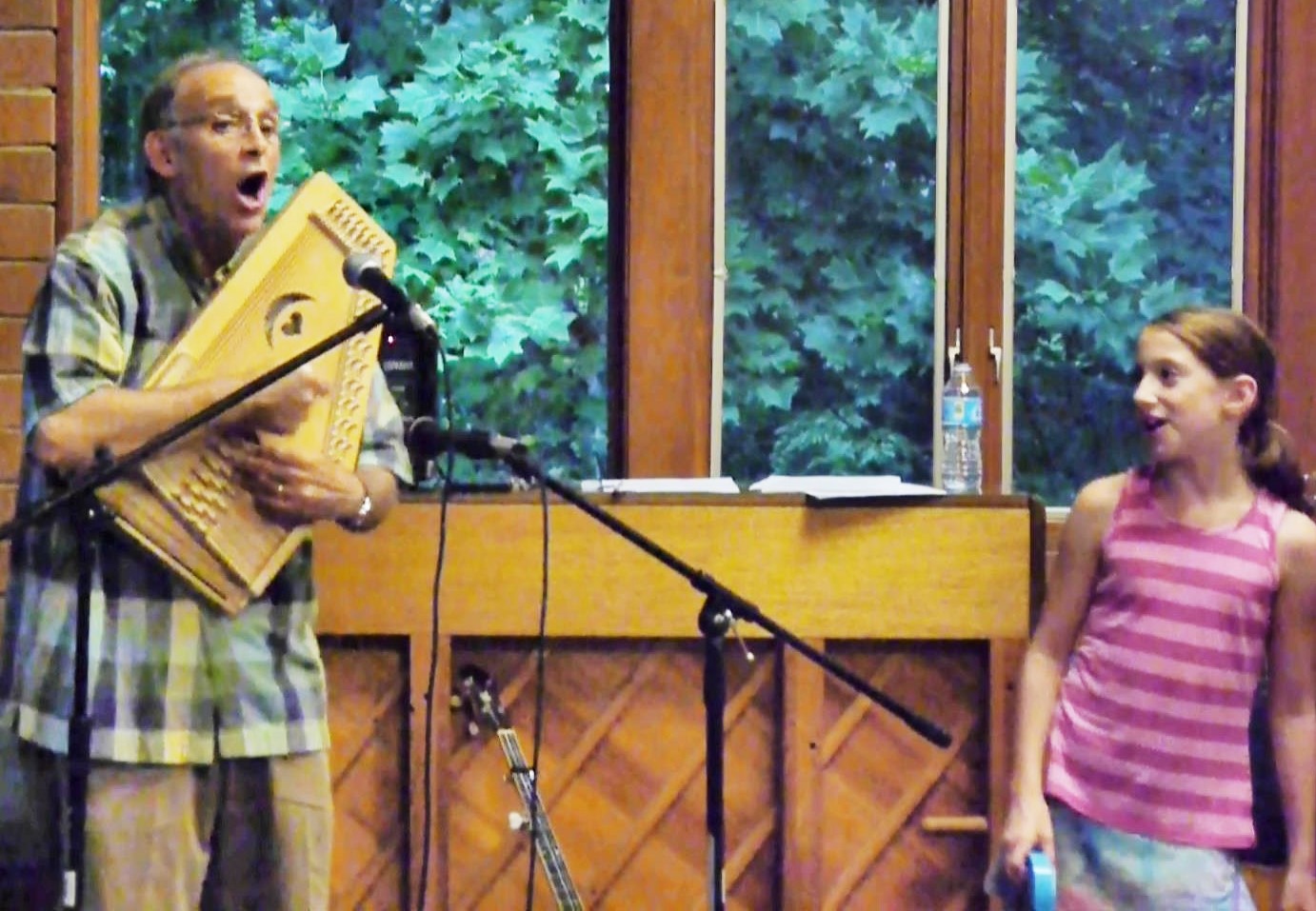 There is plenty of chance for participation – through singing, movement, playing rhythm instruments, and responding verbally in different ways. Everyone gets involved in this celebration of unity and diversity. If the group is not too large, Jon can include a "twist-and-tell" story, then after the program make personal balloon figures for the children. Mentioning balloons in the promotion helps draw more families, as well as spicing up the program and adding a reward. Jon can provide photos and flyer.

"Thank you so much for sharing your talents at our Vacation Church School picnic. Your awareness of the wide age range and varied attention spans was remarkable! Watching the children ease forward so they could be a part of the group was wonderful. I look forward to other opportunities when you can share your storytelling and singing magic with us." 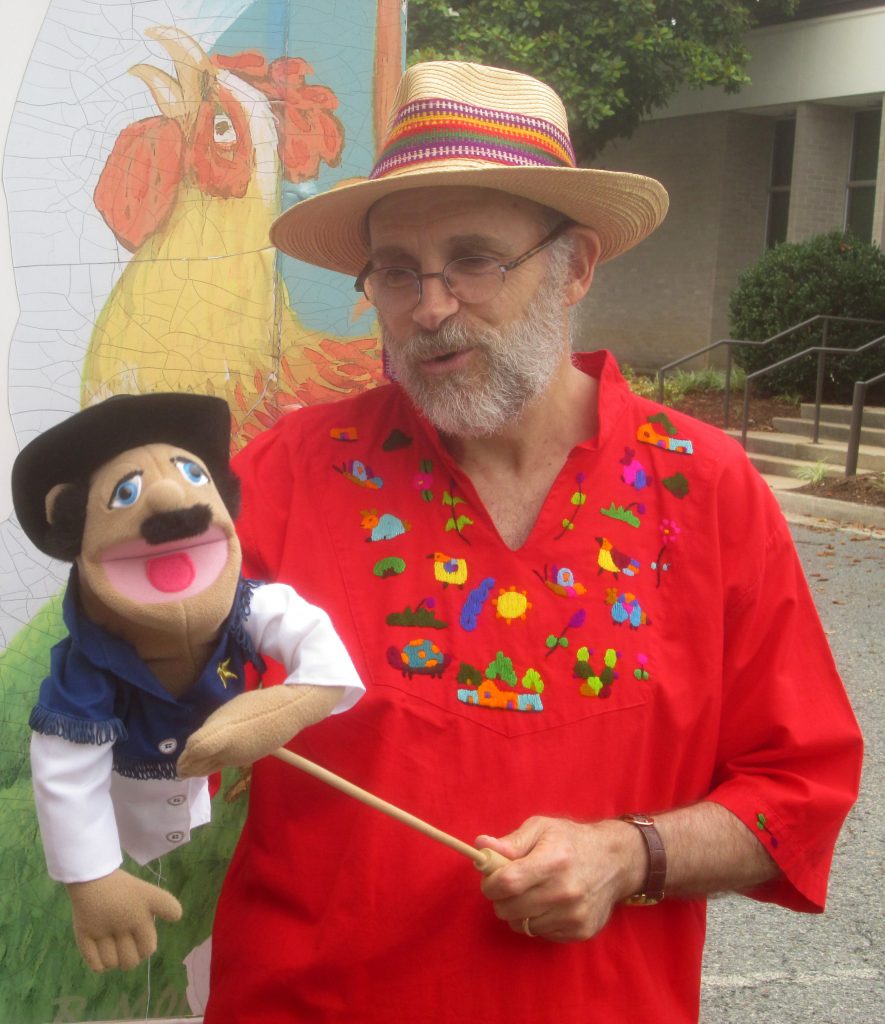 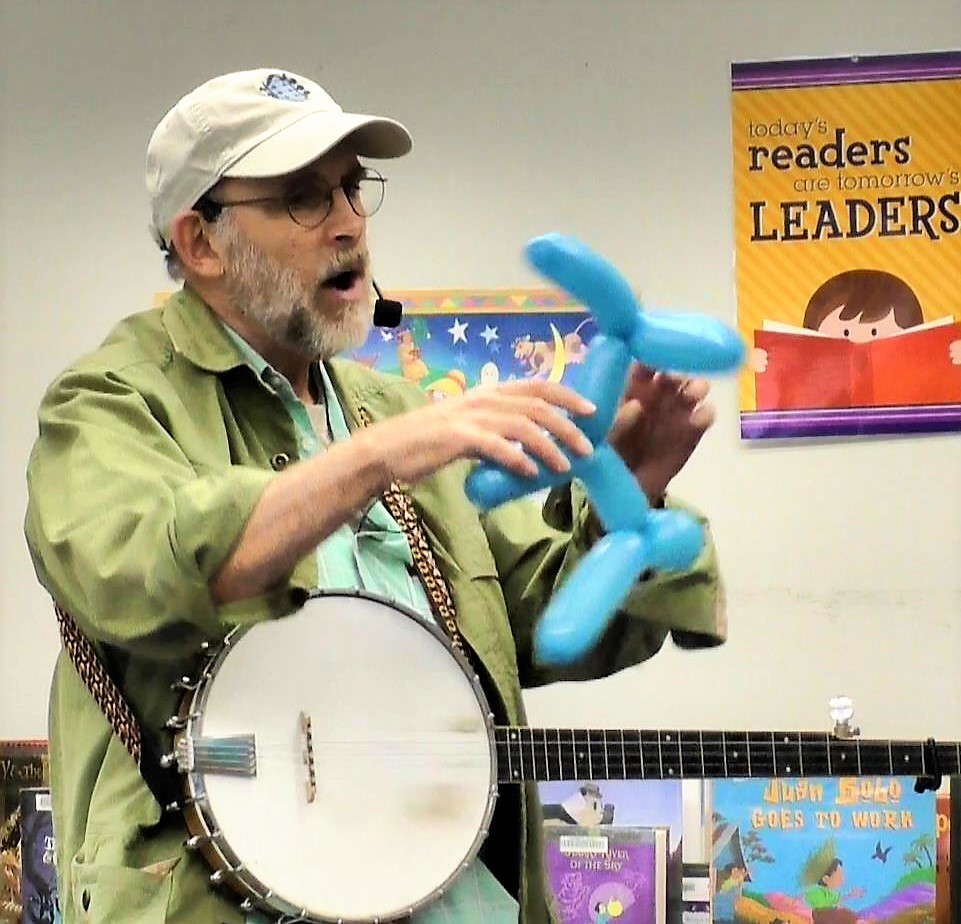 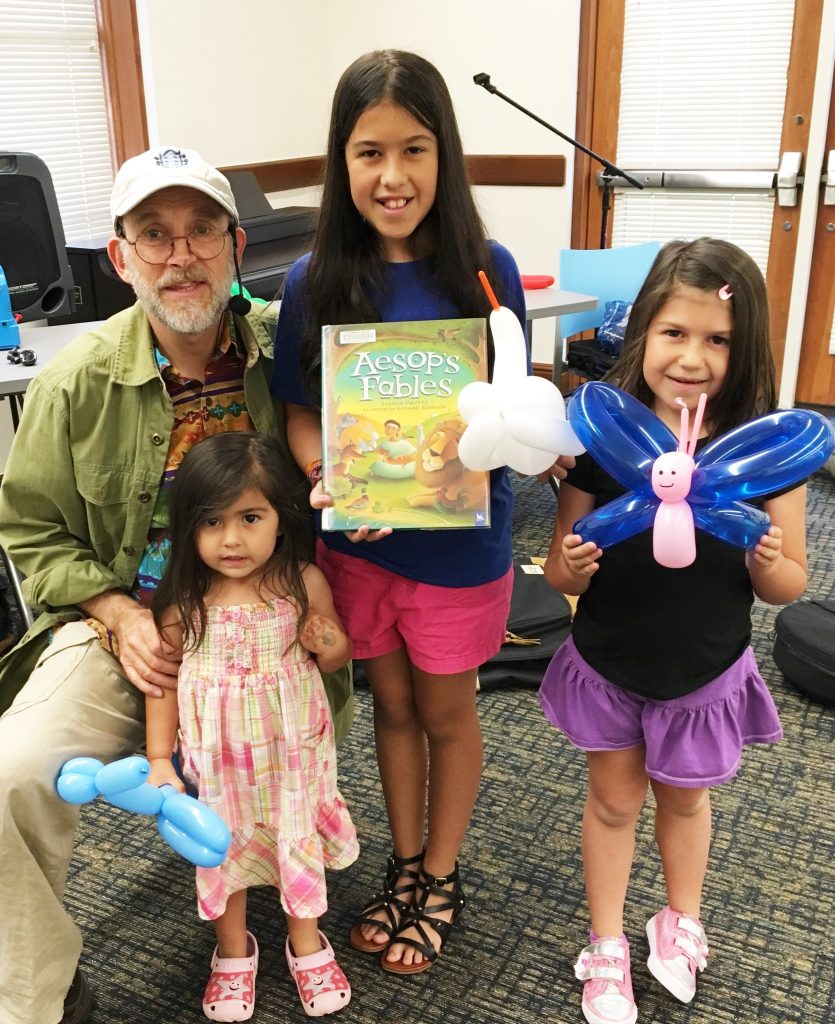 Anansi and the Hat Shaking Dance -  Anansi burns all his hair off trying to hide the hot beans under his hat!!

Story/song version of Stone Soup – Two travelers trick the stingy townspeople (the audience) into adding ingredients to their magical soup "made from a stone."

The Long Chopsticks - A student learns the secret to happiness when he sees people use their 3 foot long chopsticks to feed each other. 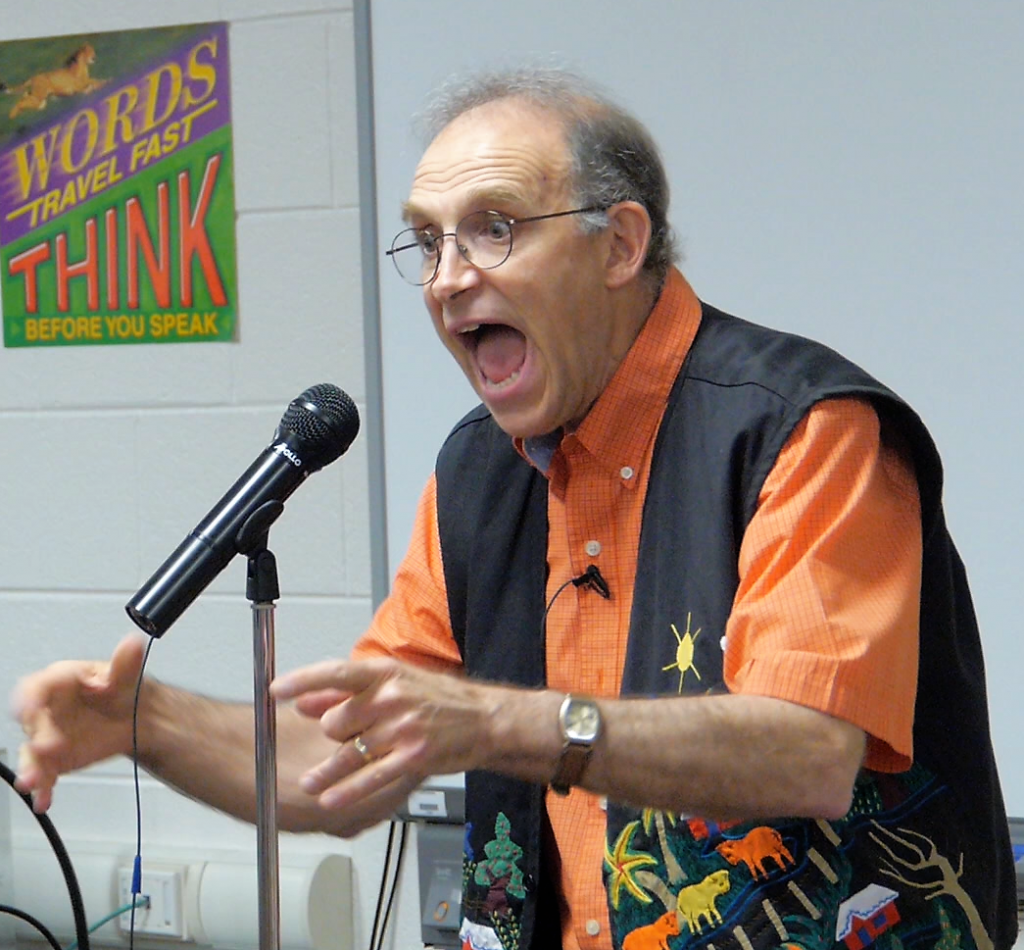 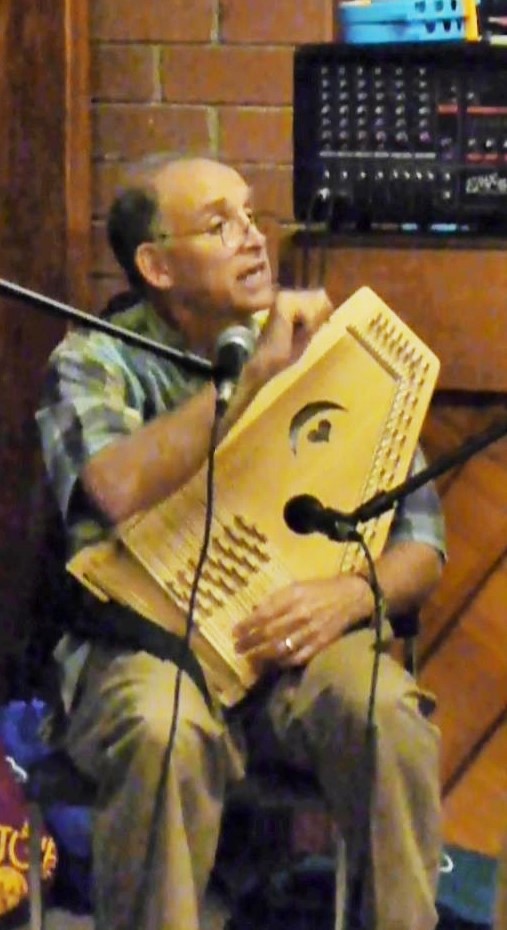 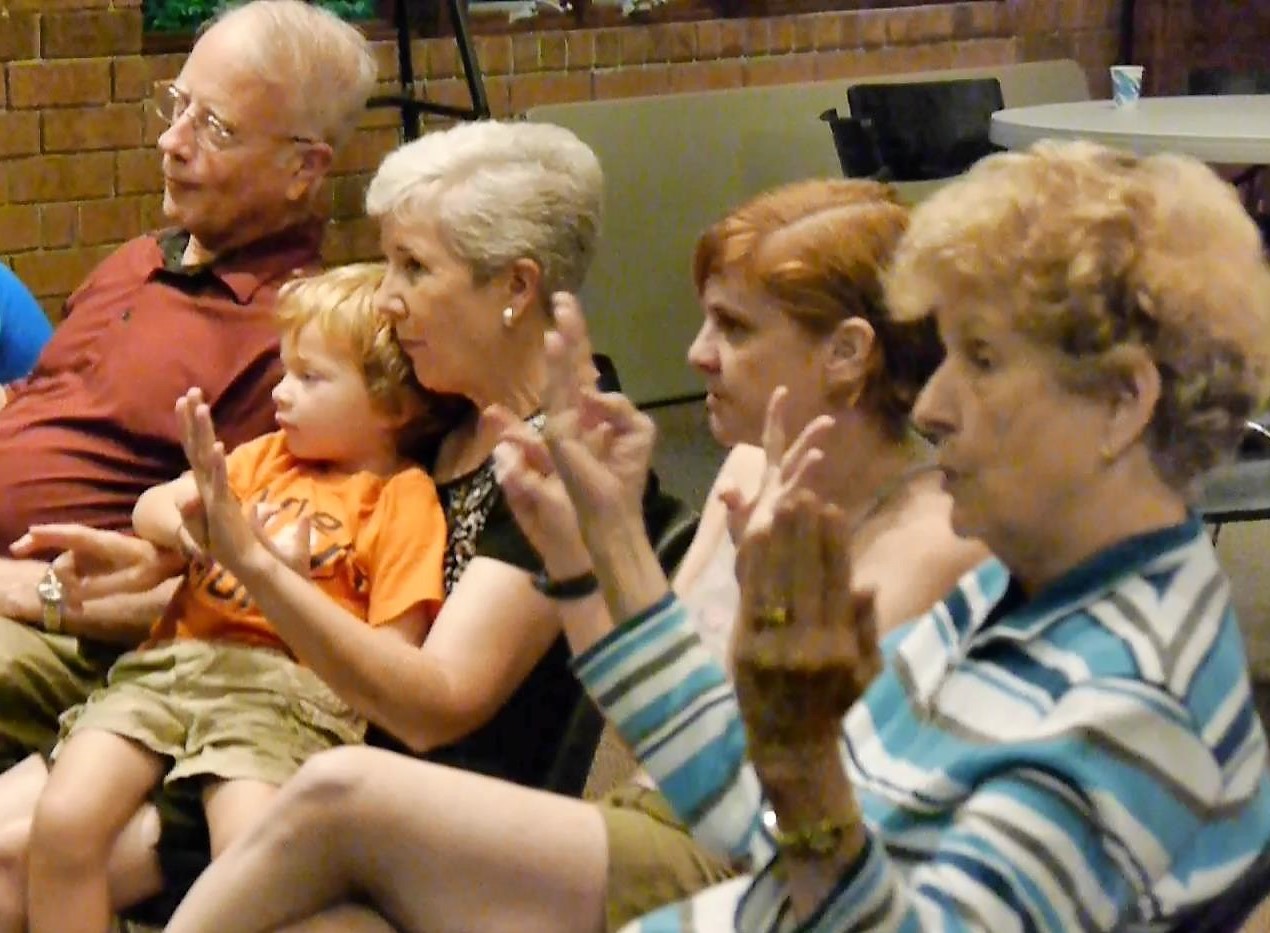 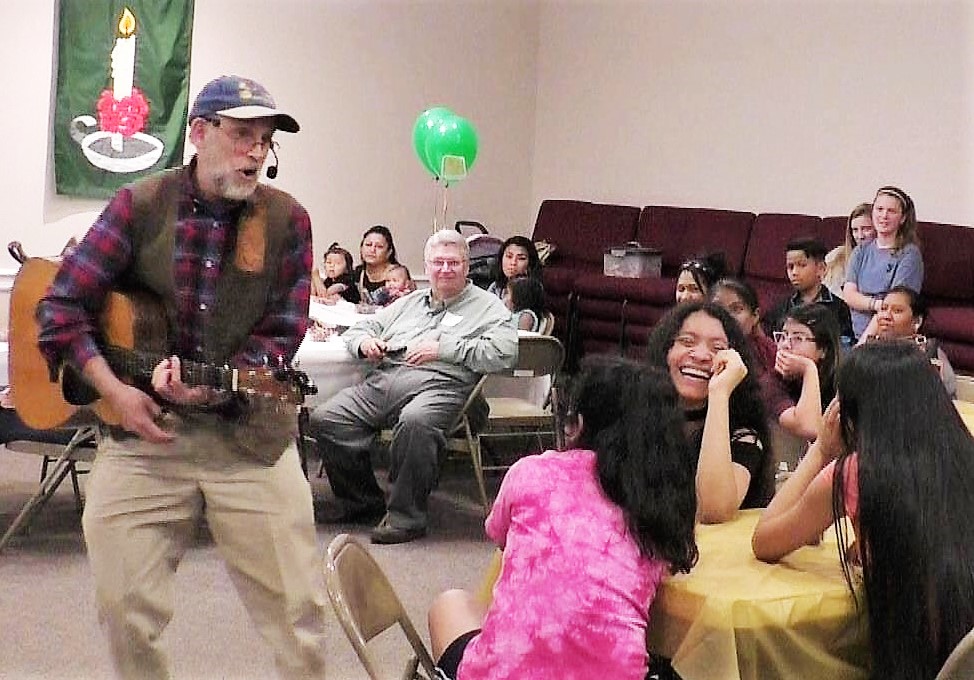 A sampler of typical songs and tales that might be included in family and children's concerts for congregations. Themes range from pure fun to serious questions of how we practice love and understanding of God, neighbor and the universe in our daily life. Sometimes serious themes are treated with a humorous touch! For quicker viewing the bolded items present a representative variety, but full viewing is encouraged. (1) 0:04 "Rise and Shine and Give God the Glory Glory," folk song, with autoharp; (2) 1:11 "We're All a Family Under One Sky," folk song by Ruth Pelham, with guitar; (3) 2:13 "Love Grows One By One," folk song with motions by Carol Johnson, with autoharp; (4) 3:10 "Stone Soup," traditional folktale, musical version

"Our preschoolers loved this program! The songs were silly and engaging and the stories held their attention. We had some senior citizen friends at the program too, and it was wonderful to see them singing along to some old familiar tunes!  The children each got to pick their own balloon animal to take home at the end of the show! They all went home smiling!"
- Lisa Wallace, director, Stepping Stones Preschool, Harrisburg United Methodist Church, NC

Jon has a special appeal to seniors because many of them remember the old folk, bluegrass and country songs he sings, and they enjoy revisiting them. "Keep On the Sunny Side," "I'll Fly Away," and "My Grandfather's Clock" are examples of religious and secular songs that strike a deep chord. Seniors also relish hilarious tall tales like "Daniel Boone and the Split Dog," told as Jon creates and manipulates a balloon figure of Old Blue, or the Cajun Possum who plays dead, then eats up the stew around him and escapes from the oven to reclaim his hide from the fur trader. There is generally a tale or two for serious reflection, like the Turkish wisdom tale of Nasrudin Hoja who "feeds his clothes" at the rich muchtar's banquet - to teach him that respect should be based on a person's character, not his outer appearance.

Like many early country artists Jon is an old school entertainer and "raconteur," combining dynamic showmanship with a warm, personal manner and homespun humor. Yet he easily turns to a thoughtful tone as he sings and tells about emotional experiences and moral/ spiritual issues reflected in more serious fare. The fact that Jon is a senior himself helps him make a strong connection to this age group and strike a deeper chord.

As well as his concerts, Jon's square dance events are very popular with seniors because of his patient, thorough manner, ensuring everyone can follow along. At the same time, he uses humor that puts folks at ease with making mistakes. He makes it clear that the important thing is not getting the moves perfectly, but having fun and connecting with others. His dances are marked by a sense of friendly exuberance!

Jon also enhances the experience by breaking up the dancing with several interludes of music and storytelling that entertain everyone present. Dancers get plenty of chance to rest, and those who are unable to or don't want to dance also get to share in the fun.  You can see more information on square dances at the bottom of this page. 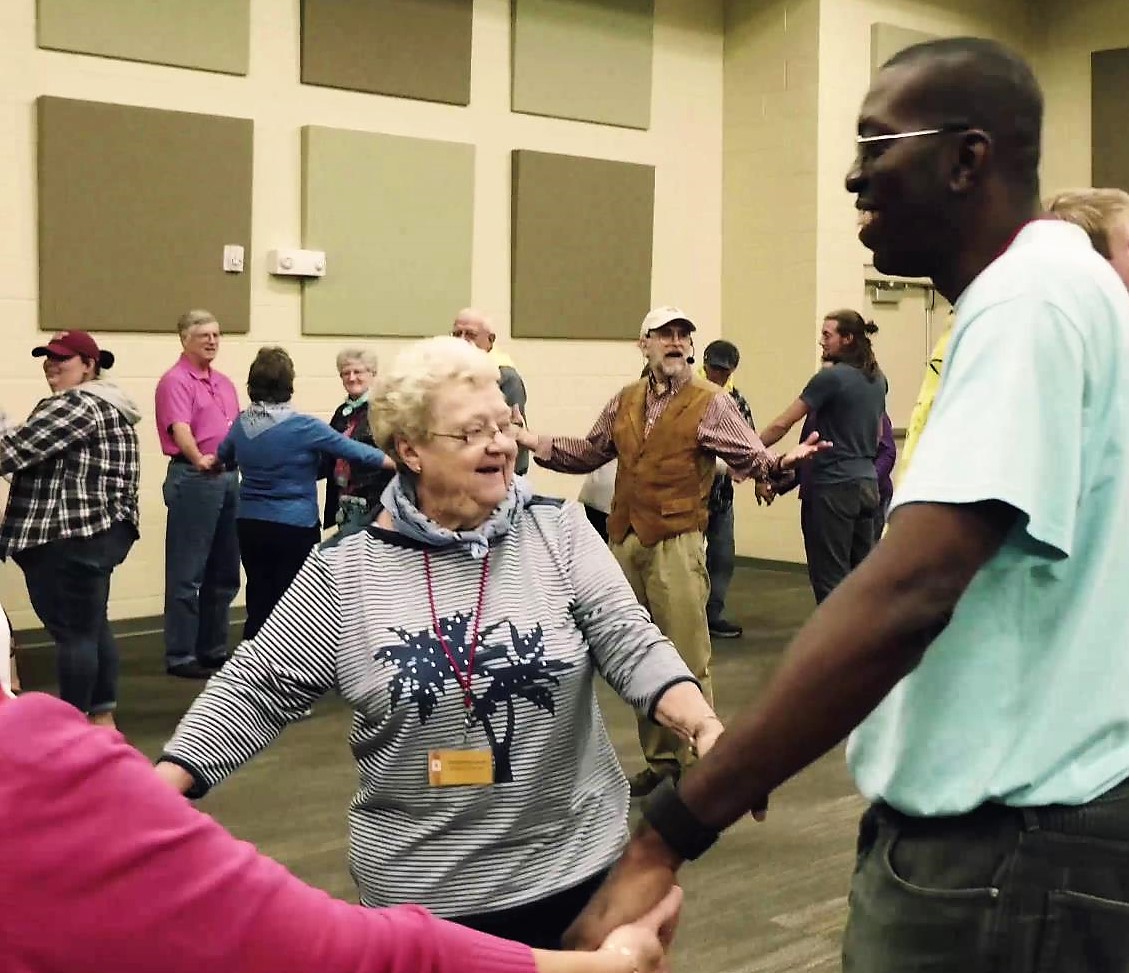 "Martyn and I thought your concert/ square dances went extremely well, and we really enjoyed your performances as well as your demeanor with the senior adults.  You guys were the best group we have had in many years! Thank you so much for the work you do and providing a great and entertaining experience for the senior adult campers this fall at Cheerio!"
- David McDonald, Program Director, YMCA Camp Cheerio, Glade Valley, NC

Through all his years of working with children, Jon has never lost his original and ongoing role as an adult entertainer. Adult concerts in faith settings can be done in several different ways, according to the preference of your group:

SONGS AND TALES OF THE SPIRIT -

The Songs  in this concert are generally Christian songs that lend themselves to folk style presentation with Jon's different stringed instruments. They range from lively gospel, to African American spirituals, to quiet meditative hymns, Sacred Harp and unaccompanied camp meeting songs. A secular song or two may also be included that relates to spiritual/ religious themes.

The tales in this program, unlike the songs, are drawn from a broad variety of world faiths - Judaism, Islam, Hiduism, Buddhism, and earth worship and native religions.  They provide food for thought, as well as some humor. Generally these share themes with Judeo-Christian belief, but they may approach them from a different angle that gives us a fresh look.  Or they may introduce other  themes and concerns worthy of our reflection. The stories also give us a fuller view of faiths that influence our neighbors around the globe.

Outwitting Fate - In this Hindu tale a young brahman is outraged to discover that the God Brahma has pre-destined the two children of his devout teacher to become a poor farmer and a prostitute. He sets out to trick Brahma and change their destiny.

The Mustard Seed – When a woman begs the Buddha  to change her poor lot in life, he agrees to do so if she will bring him a mustard seed from a house that has not known sorrow and suffering.

Short tales of Nasrudin Hoja – A Sufi Muslim who lived in Turkey in the 13th century, Nasrudin taught in an odd and often humorous way. 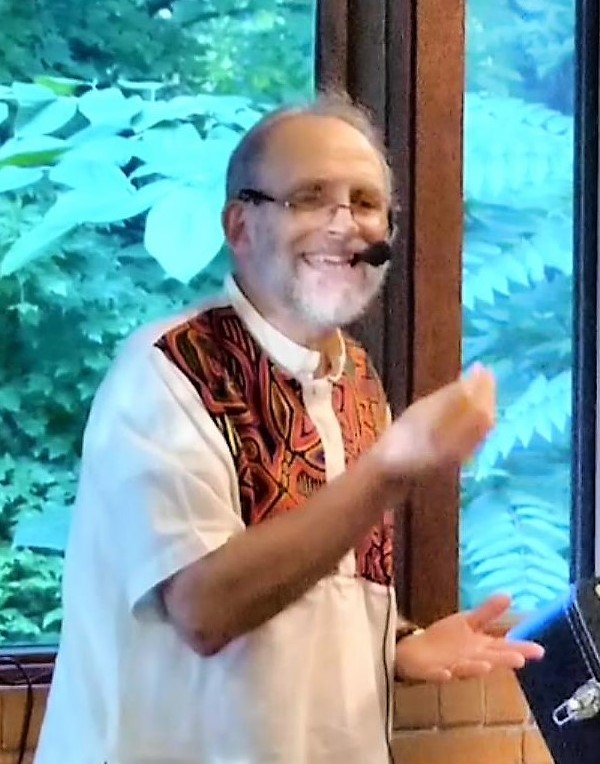 "I felt in all your contacts that your performances were richly rewarding – both for the warmth of your manner, the balance and variety of your materials, and your skill in demonstration of the many instruments you have mastered. I’m sure almost any age would have a more complete understanding of American folk music if they attended one of your concerts."
– John Bowers, Fountain Street Church, Grand Rapids, Michigan

MOSTLY SECULAR SONGS AND TALES – A veteran performer of four decades Jon presents folk songs from the Appalachian Mountains to all over the United States and the United Kingdom, accompanied on guitar, banjo, autoharp, and mountain dulcimer. These are interwoven with folktales from all over the world.  Often several songs and a tale are tied together along themes that illuminate their meaning. This can be presented in one set of 45-60 minutes or two 45 minute sets.  See adult concerts for more detail.

SONGS & TALES FOR A BETTER WORLD – A more sophisticated version of the children’s/ family program, this concert combines songs of good will with multicultural folk tales emphasizing compassion, community, and justice. Many of the songs can be heard on Jon's CD in progress, One World Family. 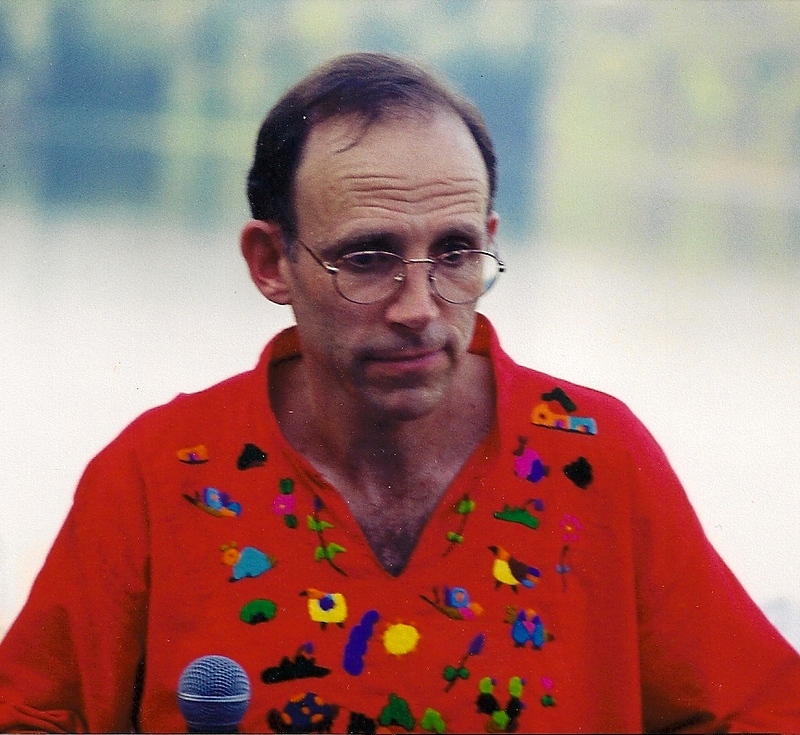 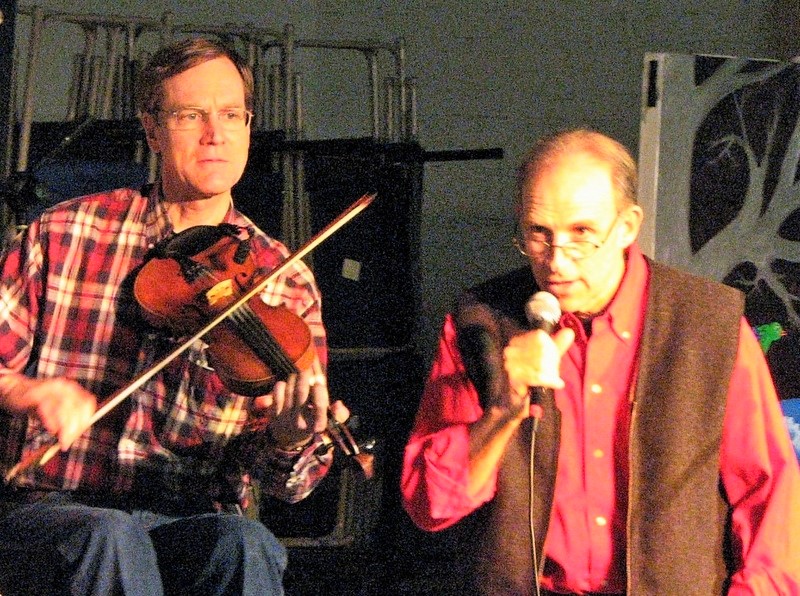 SQUARE DANCES (for all ages)

“I just wanted to thank you once again for the wonderful time we all had at the Square dance. You did a super job with the children’s stories, songs and dances. They all really felt a part of the whole evening.” 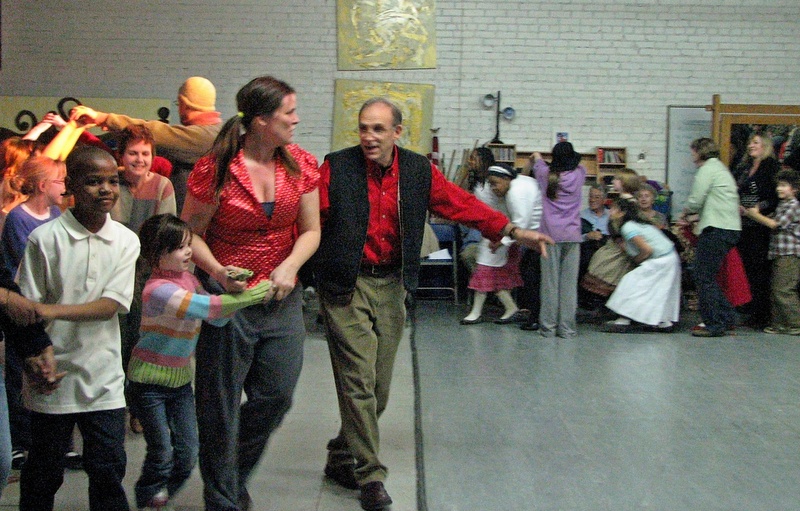 SQUARE DANCE: Another great activity that Jon leads is square dancing. The combination of lively music, physical activity, and social interaction is great for lifting spirits and building the spirit of community. Jon specializes in teaching complete beginners, although those with experience are certainly welcome. Dancers love the challenge of working together to perform different figures like the big basket, thread the needle, mountaineer loop or birdie in the cage.  Children from eight years up can usually participate along with the adults. A live band helps create a celebratory atmosphere, but if your budget is tight, Jon can also lead a dance using recorded music. Square dancing is the ultimate collaborative sport! Participants go home with a  skip in their step and warmth in their heart from having shared this great event with their fellow congregants or community members.

If you wish, Jon and the band members can fill one or more interludes with music and storytelling. A dance event can run anywhere from one to two hours, depending on what seems appropriate for your group and the occasion. 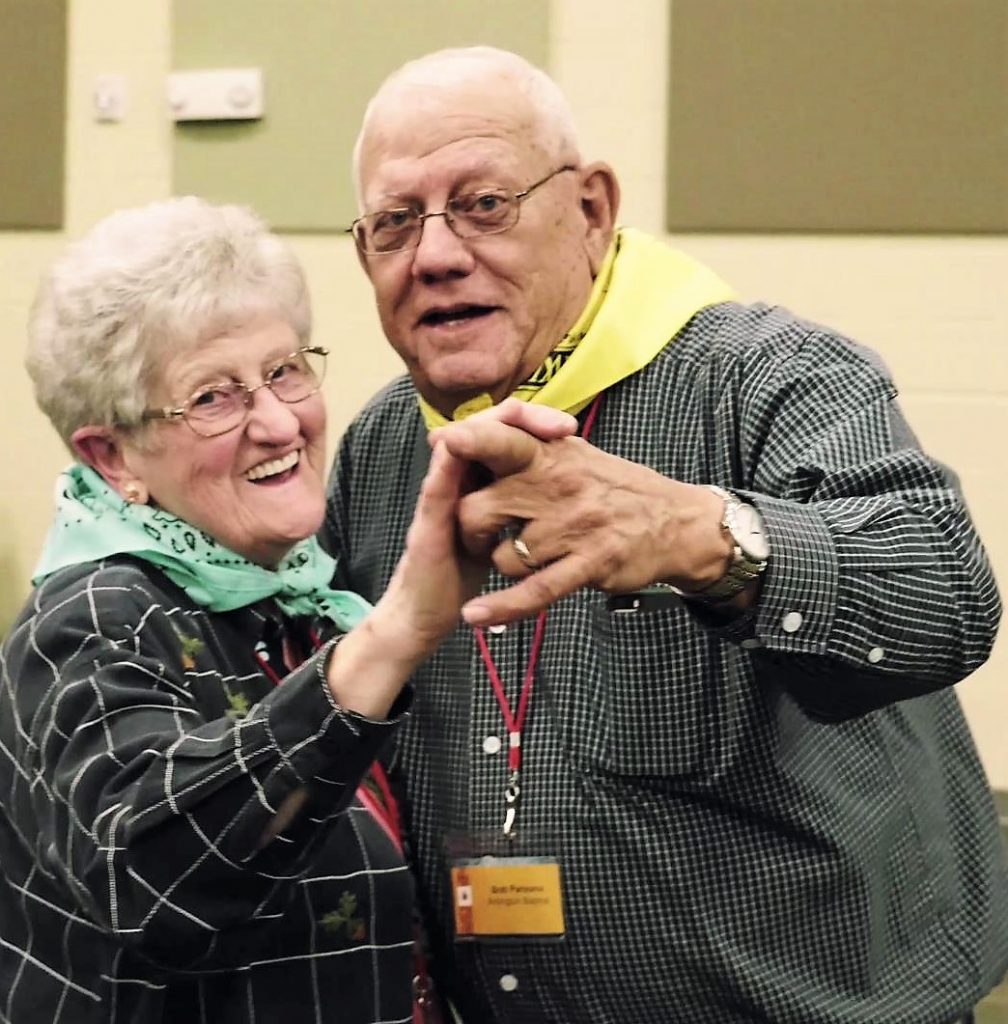 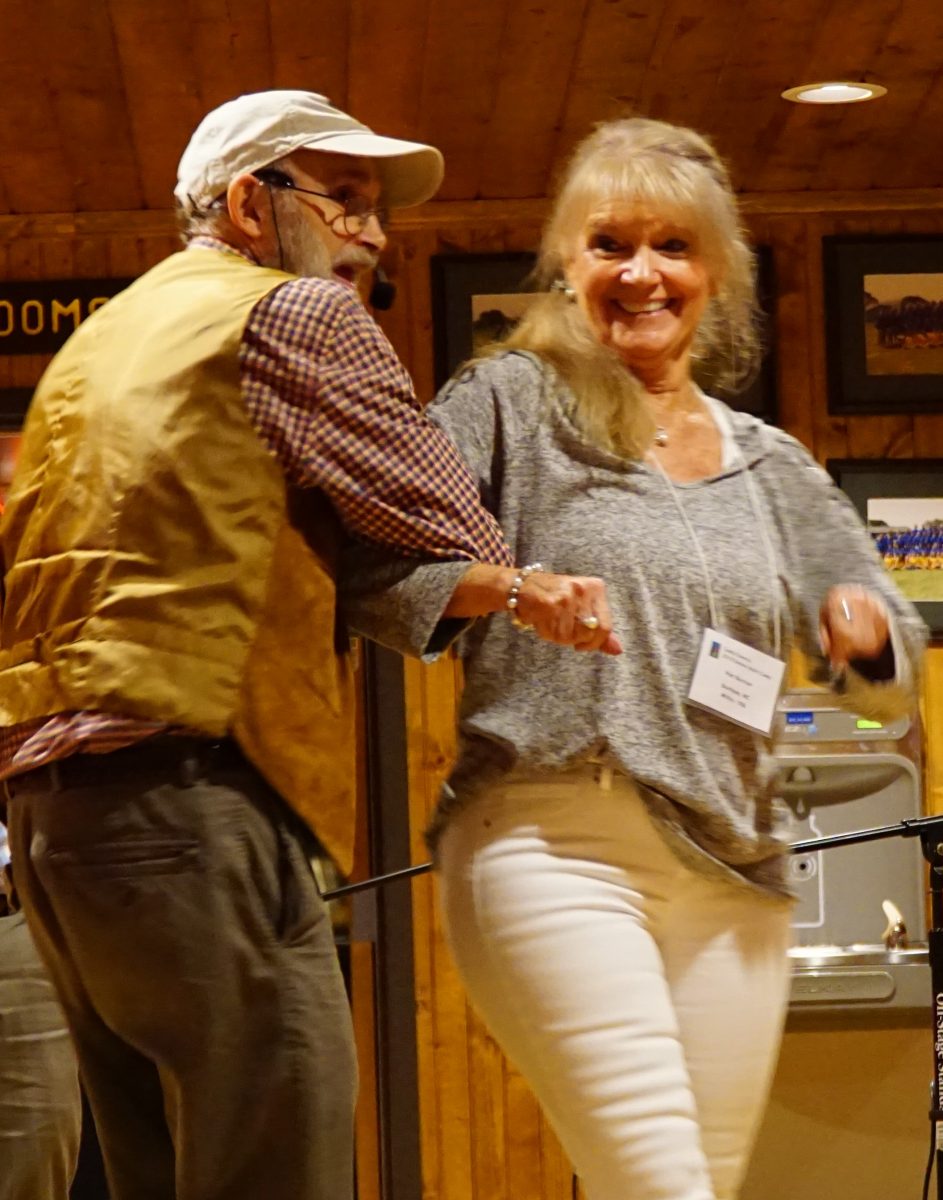 Video sampler of Jon leading North Carolina square dances for seniors and staff at YMCA Camp Cheerio and Camp Caraway Retreat Center. Introductory photos are from an elementary school family event. The band shown is playing at Camp Caraway. For quick viewing sequences 1 & 2 give a good idea of Jon's calling skills, showing how he starts off a group from scratch and gives them basic instruction. But full viewing is encouraged. Above all notice how much fun people are having! (1) Thread the Needle Warm-up dance (no instructions needed); (2) Appalachian Big Circle Dance, with "Right & left hand star" and "Birdie In the Cage" figures. Fairly complete instructions shown + dance excerpts with music; (3) Virginia Reel - Fairly complete instruction shown + two turns of the dance with music. Jon uses a humorous touch to get the side couples assisting the lead couple. He also steps in to help the 2nd lead couple when they get lost. (4) Dip & Dive - Partial instruction shown + one turn of dance; (5) Appalachian Big Circle, including "Take a Little Peek" and "Mountaineer Loop" figures in small circles & "Thread the Needle" as a big circle wrap up. No instruction shown. One turn each of small circle figures shown + excerpt of wrap up. Notice the shot of audience members clapping along - everyone joins in the fun!; (6) Last waltz. This is done free style without instruction.Seniors especially enjoy doing an old fashioned slow dance. This couple certainly does!

“You did a great job! You balance the fun of dancing and stories with the serious attention needed for instruction. You guys were the best group we have had in many years!”